Needed this when I visited Indiana all by myself!!! That visit traumatized me!!!

Here is the link to the ESPN article

On last Friday, I had a conversation with a parent about her talented rising senior daughter. It breaks my heart because I have this conversation too often and sometimes at critical times..So I created a video with tips for high school players/parents (that have a goal to play basketball on the college level) on how to select an AAU/Travel team and how to get more looks/offers from college coaches… 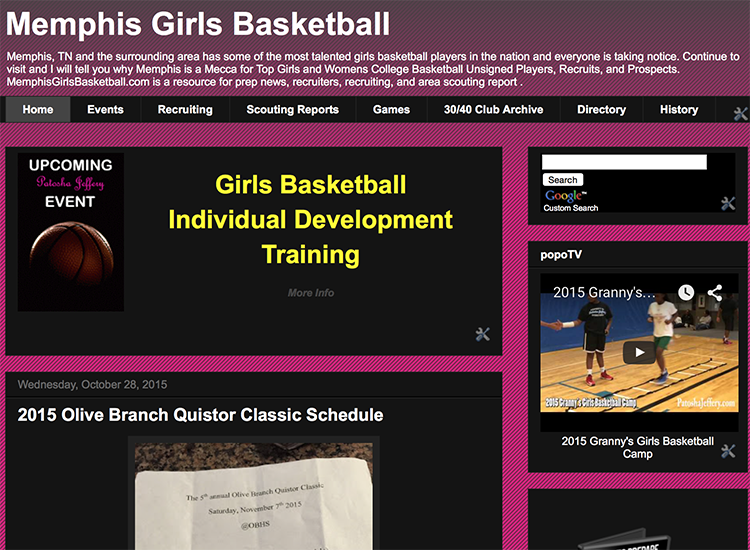 I’ve been talking about this for the past couple of years at my Pre-Season Show Off Camp.

I am Twitter and Facebook friends with Memphis area players and I have to shake my head with some of the things that I see.

When college coaches are evaluating you to play for their college programs, they not only look at your basketball talent. They look for the type of person you are and social media is the best place to see the real you.

This week during SEC Media Day for football, Arkansas Football coach, Bret Bielema, broke it down on how he uses social media background screening and why.

(Video and article from ESPN.com)

Going back to the words of his former boss at Iowa, Hayden Fry, Arkansas coach Bret Bielema told reporters at SEC media days on Wednesday that you “recruit your own problems.” That means looking into every angle of a prospect, he said, including his social media presence.

“We have a social media background screening that you’ve got to go through,” he said, “and if you have a social media nickname or something on your Twitter account that makes me sick, I’m not going to recruit you. I’ve turned down players based on their Twitter handles. I’ve turned down players based on Twitter pictures. It’s just that’s how I choose to run our program.

“It’s the things that [athletic director] Jeff Long and our fans hold me accountable to. I’m never going to waver in that.”

Bielema entered the SEC in late 2012 after seven seasons as the head coach at Wisconsin.

Arkansas went 7-6 last season after posting a 3-9 record the year before.

“If you want to recruit somebody of high character and value, somebody you can trust to not only watch your house, but your children, someone you can count on to share carries of 1,000 yards each rather than trying to get 1,800 for one, now you’re going to build something that matters,” Bielema said.

“It’s a bunch of we, not me, and I can’t stress enough that, just because you’re a great player in the United States of America, doesn’t mean Arkansas is going to recruit you.”

June is a very important month of the year for basketball players. It can be the first break of the year from basketball for some. Some are getting breaks from their AAU/travel team schedule. While some high schools are using the opportunity for team bonding and activities. June is also a very important month for development. Since we are almost midway through the month, I felt it is a great opportunity to emphasize it’s importance.

These are the 5 worst things you can do during this month:

Not Attend a Basketball Camp

A couple of weeks ago in my last Ask Po Po video I talked about June being basketball development month. Basketball camps are being hosted all of the US on college campuses, at private schools, at local gyms, etc. As a matter of fact, I just wrapped up my E.L.I.T.E. Academy on Saturday. Camps are the perfect place to learn something new about basketball. It is the perfect place to add something to your game. It is a great opportunity to get around a different group of basketball players.

There’s nothing worst than having a break from basketball and coming back to the team bigger and slower. It’s OK to take some time away from the game. I actually recommend that you take some time to rest your body, muscles and brain. But while you are on your break, be aware of what you are putting in your body. Stay away from fast foods and sodas every day. Drink plenty of water and eat your fruits and vegetables. If you are the type that trains consistently and work extra, use this month to change up your routine with less pounding on your body. Go swimming or simply walk.

Not Pick Up a Book

Just because you are out of school doesn’t mean you should stop learning and growing. I recommend that you read a book on basketball or something that can help you with basketball. This is another way for you to increase your IQ of the game or you can learn about teamwork, leadership or success.

Not Reach Out to College Coaches

If your team is playing in NCAA-certified events or you are participating in the events as an individual in July, you should be contacting college coaches this month. In my Ask Po Po series, I’ve shared with you How to Get D1 College Schools to look at you (Part I, Part II, Part III). Review the information in the videos. This is the perfect time to reach out to coaches to let them know what events you will be attending next month.

Not Know Where You Stand Academically

School is out so you should have received your report card by now. Or if you can access your grades electronically, you know what you made this past school year. It is getting harder and harder to become academically eligible to play college basketball. Check your grades and core courses to make sure you are on track. Here is a website to help you.