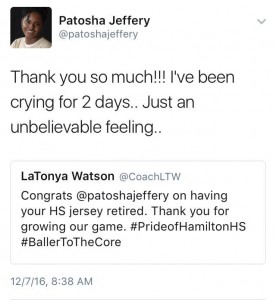 Well I guess it’s official!!!!!!
When I got the phone call on Monday, I didn’t really believe it.. So I kept it too myself.. Will (Smith, Hamilton Boys Head Coach) had been texting me asking for info.. Me being silly said to myself..”Why Will keep texting me for this info — they must gonna retire my jersey..” Well the joke was on me because he eventually called and said they’re gonna retire my jersey…..Before I told my family, I had to call him back on Tuesday to get confirmation.. When he confirmed, I just started crying.. I told my parents and mentioned it to my team at work.. But I had to hear it one more time before I told anyone else….. Then I saw Will’s video this morning announcing that my jersey along with Paris London’s jersey will be retired on this Friday at Hamilton High School… I just broke down…Just an unbelievable feeling this type of honor… I have a feeling that I will not be able to contain my emotions on Friday.. I have to thank my Hamilton teammates.. I was so unbelievably shy in high school.. So I didn’t talk much at times– not even to them, off or on the court–LOL.. But they were not having it especially Sabrina Watson and Niki Newman.. My teammates stuck with me, followed my lead, picked me up when I was down, tried to hand me water during timeouts, opened the huddle up so Coach Newman could stare me eye to eye or jack me up when I was trying to hide in the back… I love every single one of them and there is nothing that I would not do for them… Coach Newman — I was so afraid of this man… At first he was the nicest person on earth.. Got me a job at the community center.. Told me that I could play ball in college.. Just super nice… Then that first scrimmage.. OMG— I did not know what I had got myself into by attending Hamilton High School.. That man stayed on me.. I could not do anything right.. I scored 45 points in a game and he told me I should have had 60.. I’m thinking are you serious!!! I would go home and just cry and cry and cry… My dad would tell me… well just quit..(reverse psychology).. Then I’ll think about it and say myself— “Nah I ain’t quitting”… During the games, Coach Newman was tough but when the game or practice was over, he was super cool.. He would go through a brick wall for us… I really, really appreciate the lessons he taught me and my teammates…. So with that being said if you are available on this Friday, December 9 at Hamilton High School at 6pm… I would love for you to come help me celebrate this occasion of having my jersey retired…..#LoveHamilton